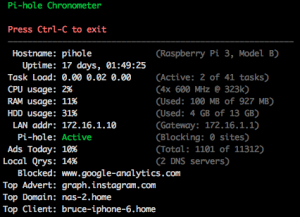 Just a few notes on my setting up Pi-Hole on a Raspberry Pi 3:

I like the basic concept of chronometer2 quite a bit, but I felt it could be improved upon slightly. For example, I don’t use my pi-hole as a DHCP server, so the few lines of the display showing it’s disabled is just wasted screen real estate as far as I’m concerned. I would much rather see the top client, top domain, and top advertiser that the original chronometer displays. I also wanted an easy way to be able to restart the chronometer2 display on my TFT display that didn’t require rebooting the whole Pi. When I’m tinkering with the chronometer2 script it’s annoying to keep rebooting the Pi and causing brief DNS outages on my network.

Given these thoughts I decided to make some tweaks to the script. Having spent years as a software developer I had one other small detail that I kept in mind – I didn’t want to change the default behavior in any way. So if you’re using the existing chronometer2 script and just drop my version into place on your pi-hole then you won’t see any difference unless/until you start playing with the new parameters I added. Without further ado, the parameters I added include:

Why include the –pid option, you might ask? Good question! As I mentioned above, I wanted a way to be able to restart chronometer2 on my TFT display without having to reboot my Pi or doing any other tricky shenanigans. Most people set up their chronometer script to run out of /etc/profile or /home/pi/.bashrc by simply adding either ‘pihole -c’ or ‘./chronometer2.sh’ to the bottom of one of those files. Here’s how I have my .bashrc set up:

For those of you who aren’t terribly familiar with shell scripting, here’s a breakdown of what this does:

I also have a command called ‘killc2’ set up in my .bashrc:

So now whenever I want to tinker with the chronometer2 script in any way I just edit the script and/or my chronometer2.cmdline file, invoke the command ‘killc2‘, and after a short pause the script restarts on the TFT display with the new parameters and any other changes I made.

My modifications to the chronometer2 script can currently be found here. If they’re merged into the official chronometer2 project I’ll update this to point there instead.

Here’s a handy little IMAP utility people may find useful. IMAPrunner was an excuse for me to learn a little more about Python programming and to also throw together something useful at the same time.  It’s a Python script that lets you associate scripts/commands with mail messages in individual mail folders.

I now have a cron job set up that checks for any e-mails I add to a “spam” folder.  If I receive any spam I just move it to that folder.  IMAPrunner will then pass the spam e-mail onto SpamAssassin, razor, pyzor, etc. and then delete the e-mail automatically. There’s really no limit to what you can trigger in response to an e-mail with it.  And I already have a few thoughts for improvements to it…

I was recently contacted by Packt Publishing and asked to review their book Instant Nagios Starter, by Michael Guthrie.  I’ve actively used Nagios (and forks) for well over a decade now, and have even contributed some code development to it, so I’m intimately familiar with installing, configuring, and managing Nagios environments.

Nagios is an extremely powerful and flexible monitoring platform, and those two attributes also result in it also being a fairly complex piece of software to configure if you’ve never dealt with it before.  This book does an excellent job of walking you through the steps of installation and basic configuration of Nagios on a CentOS/RHEL system.

Nagios, as with just about any complex piece of software, relies on a number of system configuration settings, files in multiple locations, etc. to run properly.  Instant Nagios Starter does an excellent job of walking you through each and every dependency so that you can get a basic Nagios server up and running in no time at all.  If you’re new to Nagios, or need to spin up a new Nagios server and may have only ever worked with existing Nagios setups in the past, then this guide will save you a lot of time and potential aggravation in getting started.

The title of this book is extremely accurate – it will get you started with Nagios in almost no time at all.  If you’re looking for anything beyond the basics of setting up Nagios then you’ll want something a bit more in depth, and Packt Publishing has you covered there as well since they also have a number of other books on the subject.

Perhaps the only thing that would make this book more valuable would be if Packt Publishing offered a download of a VMWare CentOS instance with Nagios pre-installed (or partially installed) for those who don’t want to waste any time installing linux first.

I use Nagios (actually Icinga) at work and do a lot of tinkering with it.  I recently needed to modify the check_dig command to allow for verifying whether a response is authoritative or not.  This is apparently something that’s asked for a lot according to some Google searching that I’ve done, so I wrote a quick patch, and I’ve submitted it to the Nagios Plugin project on Sourceforge.  Hopefully they’ll accept it, but in the meantime I thought I’d post it here as well so others can make use of it if the have a need for it.

If you’d like to keep track of the status of the patch on Sourceforge you can check it here.